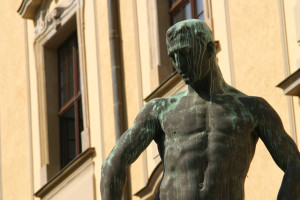 Wrocław is the fourth biggest city in Poland, with the population of 700,000 inhabitants. It is the economical, cultural and intellectual capital of Lower Silesia, located in southwestern Poland. The city was established on one of the islands formed by the multiple channels of the Odra River near its junction with the Ślęza, the Oława, and the Widawa. As the city spreads over 12 islands connected by 112 bridges, it is known as the “Polish Venice”. Wrocław has many remarkable architectural sites whose history is inextricably bound with that of the city.

The Cathedral Island (Ostrów Tumski) is one of the oldest parts of Wrocław, where traces of the original settlements dating back to the period between the seventh and the ninth century have been discovered. In the mid-eight century, the so-called Bavarian Geographer mentioned the Cathedral Island settlement as one of the civitates of the Sleenzane (Silesian) tribe. As an island, Ostrów Tumski was suitable for defense purposes and thus an excellent site for a stronghold. With the increasing influence of the clergy, by 1439 the entire island became the property of the Church, Wrocław’s terra sancta. As far back as the fifteenth century, almost all the church officials had gardens planted at the backs of their residences, the most famous being the “Garden of Joy” designed by Bishop Francis Louis. Today, this area is one of the city’s most popular green spaces. Walking around the Cathedral Island you are surrounded by unique architectural monuments, particularly the churches, including St. John the Baptist Cathedral, the Church of the Holy Cross, St. Martin’s Church, and many other places of interest.

The Market Square (Rynek) of Wroclaw is the main square of the city and one of its most impressive sights. Due to its size (175 m wide and 205 m long), it is said to be one of the largest market squares in Europe. The Market Square dates back to the thirteenth century. The whole square is surrounded by beautifully painted low-rise buildings constructed in different architectural styles ranging from Gothic to Art Nouveau. Originally, there were as many as 60 buildings – first made of timber, then of brick. The number has remained the same till the present day. The western part of the Market Square suffered the least during World War II, thus, the most significant and architecturally impressive houses are mainly preserved here. However, the townhouses that were destroyed during the war have been renovated and can be admired in their full splendor. The center of the Market Square is dominated by the Town Hall – a Gothic pearl and one of the best preserved town halls in Poland. As the economic status of the city grew, the building changed its size and shape. At the end of the sixteenth century major remodeling works took place – the building was expanded and some decorative elements like bay windows and spires were added. The interiors of the Town Hall are of great historical and artistic significance, for example: The Duke’s Hall, the Councilors’ Chamber and the Great Hall. Nowadays, the Town Hall houses the City Museum of Wrocław. The other landmarks of the Market Square include the monument of Count Fredro – famous comedy playwright – which was brought from Lvov and was unveiled on the eightieth anniversary of his death.

Another attraction worth visiting is the University of Wrocław, dating back to the eighteenth century, with a richly adorned portal. Founded by Leopold I Habsburg the university evolved from a modest school run by Jesuits into one of the biggest academic institutions in Poland (http://international.uni.wroc.pl/en/s3.php). Its main staircase is a masterpiece as it is covered with F. A. Scheffler’s frescoes. On the ground floor there is the Oratorium Marianum, once a chapel, now the Musical Room famous for hosting such outstanding musicians as Liszt, Paganini and Wieniawski. On the first floor there is the Leopoldina Hall (Aula Leopoldina) – the most representative university hall. Its baroque interior comprises illusionist frescoes made by J. C. Handke, stucco works by I. A. Provisore and impressive sculptures by F.J. Mangoldt. It can also climb the stairs and visit the Mathematicians’ Tower to enjoy a panoramic view of the city.

The Centennial Hall (Hala Stulecia, Hala Ludowa) is one of the thirteen historical monuments of Poland registered on a list of the UNESCO World Heritage Sites. This twentieth-century reinforced concrete structure was designed by Max Berg, major architect of the city. With its enormous central space and the dome (23 m high), the Centennial Hall is a landmark in the history of architecture. It was erected to host the World Exhibition of 1913 held to commemorate the hundredth anniversary of the battle at Leipzig. Nowadays, the Centennial Hall is a multi-purpose recreational building. Hall and its surroundings are very frequently visited by tourists and inhabitants of Wroclaw, not only because of the building but also the proximity of the Wrocław Fountain at Pergola, opened on June 4, 2009 on the occasion of the twentieth anniversary of the first free elections in post-war Poland. The Wrocław Fountain offers a multimedia spectacle affecting several senses. Water jets 40 meters up creating a screen of seven hundred square meters, on which colored animations are displayed, accompanied by music and natural sounds of splash and patter. The Wrocław Fountain is one of only several similar objects in the world. In the one hectare basin, almost 300 nozzles of different types: geysers, foggy, pointed, palm and also three fire nozzles are installed. There are as well lasers and music. Almost 800 small and big sources of light are placed in the basin. Till the end of October you may admire the fountain everyday. After 8 p.m. water fantasies are accompanied with magnificent illumination.

Visitors coming to Wrocław remember the city as a cultural center. Its theaters, including the Opera, Musical Theater and Philharmonic Hall, museums and galleries provide a continuous series of artistic events. Internationally acknowledged musical festivals have become the city’s cultural landmark. The most famous of them is International Festival Wratislavia Cantans – Music and Fine Arts. Other festivals which take place in Wroclaw include Jazz on the Odra, Old Masters’ Music Days, One-Actor Theater Performances and Festival of Actor Songs. One of the biggest cultural attractions is certainly the Racławice Panorama (Panorama Racławicka), a colossal painting (120 m × 15 m) depicting the victory of Tadeusz Kościuszko over the Russian Army under the command of General Tormasov at the battle of Racławice on April 4, 1794. Thanks to the paining techniques implemented, a viewer has an impression of being in the midst of the historical event. Painted in 1893–1894 mainly by J. Styka and W. Kossak, the renowned artists, the painting was on display in Lvov and was brought to Poland after World War II. Since 1985, after its renovation, the Racławice Panorama has been placed in the rotunda and reopened to the public (http://www.panoramaraclawicka.pl/en/what_to_see.html).

Wrocław is one of the few Polish cities to have an exceptionally large number of parks. The diversity of the represented species of trees and shrubs is impressive, ranging from 90 to 150. As far back as the eighteenth century, the Szczytnicki Park was a popular leisure destination among the people of Wrocław. In 1783, Prince Friedrich Ludwig Hohenlohe-Ingelfingen bought the park from the city authorities and converted it into the so-called Prince’s Garden, which was one of the first English-style parks established in continental Europe. The park’s major attraction, apart from new species of trees and shrubs, were its plaster cast copies of ancient sculptures. In 1862, it was redesigned in keeping with the English style by Lennés. The lanes, paths, and clusters of greenery which spread over 100 hectares were intended to form a natural landscape. Currently, besides the indigenous trees the park boasts around 320 species brought from the Balkans, Japan, China, the Caucasus, and North America. These include such rare species as Taxodium distichum, Castanea sativa, Pterocarya fraxinifolia, Pseudolarix amabilis, Tsuga canadensis, and Pinus ponderosa. In the second half of the nineteenth century, various sections of the park began to take on a unique character. A number of attractive spots emerged within the park as a result. The most remarkable is the Japanese Garden, set up on the occasion of the World Exhibition of 1913 by count Fritz von Hochberg, notable Japan connoisseur, and designed and planted with the assistance of the Japanese specialist Mankichi Arai. It is a glorious place with a unique appeal, especially during the spring and summer seasons. In 1996, it was restored in accordance with the Japanese landscape garden style. The exotic plants, pathways, arch bridges, a tea pavilion, cascades, ponds and streams create a unique atmosphere.

If you want to have a walk, the great places are the Botanical Garden with their beautiful flowers and Alpine gardens, green house and the biggest cactus house in Poland, and the Zoological Garden, founded in 1865. The Botanical Garden, covering the area of 7.4 ha, is a perfect recreation site with its quiet lanes amidst its rich flora consisting of approximately 7500 plant species. Its origins go back as far as the year 1811 when the Botanical Garden was set up as a research institution for the University of Wrocław. Situated in the oldest district of Wrocław, the Botanical Garden is regarded as the oasis of calm in the bustling metropolis. The branch of the Botanical Garden located 50 km south of the city is the Wojsławice Arboretum – the most noted for a wide collection of rhododendrons. The Zoological Garden covers the area of about 33 ha. It is the oldest zoo of Poland. Moreover, the Wrocław Zoological Garden prides itself on having the largest collection of animals in Poland with approximately 4000 species. Many of them can no longer be found in their natural environment or are threatened with extinction. The zoo is said to be one of the most beautiful in the country.

New attraction – the Dwarfs of Wroclaw – appeared on the streets of the city in August 2005. Their history is connected with the Orange Alternative movement and the year 1982. Some dwarfs with funny hats and smiling faces were painted as a graffiti covering anti-Communist slogans. Today, dwarfs are statues sculpted by Tomasz Moczek, graduate of the local Fine Arts Academy. Each of the dwarfs has a name, e.g. the Sleepyhead or the Butcher. There is also a museum dedicated to the dwarfs in one of the “Hansel and Gretzel” houses near the St. Elizabeth’s Church in the town center (http://krasnale.pl/artykuly/podkategoria/13/All-about-dwarfs/).